On MEN’S HAIRCUTS you will find here the best hairstyles for men and boys, styled by the best barbers in the world.

Want a new haircut for the vacation? Or just looking for the latest trendy haircuts to find out what to ask your hairdresser? You are at the right place!

There are many hairstyle options for black men to choose, ranging from traditional to more creative ideas. Here is a list of Top 100 Black Men Haircuts you can try. 1. FroHawk Haircut + Burst FadeA classic black men haircut that looks great whether you have wider ringlets or tight...
Read more

Once again, here are the Top 100 Men's Haircuts 2019.The year 2018 was very inspiring in terms of haircuts for men. The popular cuts of the past year allow us to anticipate the trends of the year 2019 which are the following. Curly hair are again in the spotlight, no...
Read more

The natural texture of your hair can determine the best long hairstyles for men you can adopt especially if you are looking to grow long hair. Having long hair shows that you have good genes and there are plenty of choices for men who wish to grow their hair...
Read more

Boys! Get your boyish image going, check out this 41 new hairstyles for boys and enhance your lifestyle with one of the following, smarty cuts you could adorn yourself with. There is a nice haircut waiting just for you which would enhance your confidence and bring out the real young man...
Read more

Most men find it difficult to choose a perfect hairstyle and some might feel like other haircuts are not just right for their dressing. It is not necessary to wear a complicated hairstyle to look at your best because awesome haircuts are derived from very simple styles. Since there are...
Read more

Boys usually have their taste and preferences when it comes to the type of hairstyle for kids they want to get. The haircuts may vary depending on the type and length of your kid’s hair. Regardless of what your toddler decides to go for, there are a variety of...
Read more

Trendy and contemporary, the Bald Fade haircut has surged in popularity as of late. Sometimes called the zero fade or skin fade haircut, this stylish haircut for men comes in numerous forms, such as the mid, low, and high. As such, men can mix the cut with a quiff, side...
Read more

Sometimes called a line-in or part haircut, the men’s hard part haircut is a contemporary version of the classic side part. As far as cool haircuts go, a shaved-in part provides some fabulous approaches to personalize a style. Since the hard part hairstyle offers a contrast, via a scalp...
Read more

The buzz cut for men provides style and minimalism in a single, simple haircut. If you’re seeking out an easy, low-maintenance “buzzed” men’s hairstyle that warrants year-round short hair, then the buzz cut style might be just your thing.For a masculine, rugged hairstyle, or to remain cool in hot weather,...
Read more

Similar to the High Top Fade, the Flat Top Haircut became popular in the 1950s. While a flat top hairstyle has a retro-feel, you wouldn’t anticipate seeing such a look in the modern world. However, that doesn’t make it an uncool option. The silhouette and build of the men’s flat...
Read more
Load more

Being trendy is child’s play. But, finding the perfect hairstyle for your child can quickly make your head spin. His hairstyle must look like him, suit him but also adapt to his face and hair type.
The time when the hairstyle of the little boys was, at choice, a bowl cut (there are still trauma) or a short, almost military, is over. Now the haircuts are generally in phase with the character of the child and respectful of the nature of his hair. Thus, it is no longer rare to see long-haired boys, living a thousand adventures with their friends in the school yard. The duality “long hair for girls, short for boys” is no longer and that’s good! In the desire to scramble these archaic rules, we also find little guys with stylized cuts, which require care and time in everyday life. Curly, wavy, straight or afro, there is something for everyone!
Discover the Best hairstyles for boys. 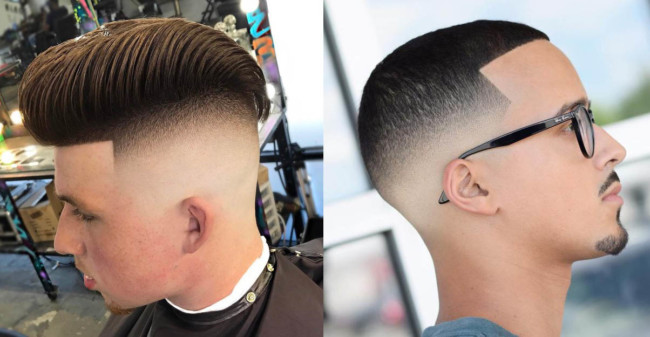 A Fade Haircut is a very short cut at the bottom, which becomes progressively longer on the top of the head. It is a rather complicated haircut that men prefer to entrust to their hairdressers. But of course, it can also be done alone at home, with scissors and clippers. It’s a timeless hairstyle that will fit with any of your looks, whether you are rather suit or T-shirt / jeans. This is the hairstyle of trendy men who care about their appearance.
Check out the Best Fade Haircuts.

Often difficult to tame, afro and very curly hair offer a wide choice in terms of haircuts! Afro, ultra-short cut, eccentric or very worked: gentlemen, you are lucky because you can choose among a multitude of styles! We help you to find inspiration among all afro cuts, whether trendy or timeless.
Discover the best black men haircuts.

Currently, men are increasingly concerned about their look. Indeed, they are very selective regarding the clothes to wear. As for hairdressing, most try to follow the trend that evolves over time. Discover the trendiest men’s haircuts for the year 2018. 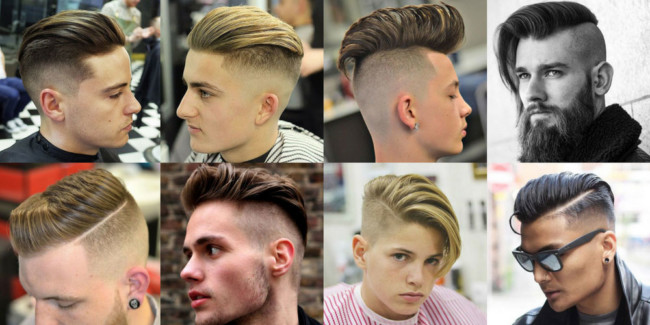 The Undercut hairstyle is a men’s haircut that involves buzz cutting the sides and back of the head so that the hair is very short. A number one or number two blade extension for the electric hair clipper is often used to achieve this. Meanwhile, long hair is kept on the top of the head and is usually parted to the right side, left side, or upward toward the center.
The undercut hairstyle was actually first made popular in the early 20th century from the 1910s to the 1940s. There are different variations of the hairstyle in terms of how long hair is grown on the top of the head and how short it is cut on the sides and back of the head. In modern times, the undercut hairstyle is making a comeback as men seem to appreciate the aesthetic value it gives them.

Aside from visual appearance, the undercut hairstyle is very easy to wash and maintain. It even feels comfortable in hotter weather because air can still access the skin on the sides of your head and keep it cool. You will never have the feeling of crowdedness or sweatiness that too much hair would normally cause. So, if you want a look that is comfortable and stylish at the same time, go with the undercut hairstyle.
Discover the best Undercut Hairstyles for men

A Pompadour hairstyle originated back in the days of King Louis XV in 18th century France. The king had a mistress named Madame de Pompadour who had a particular way of styling her hair. She swooped her hair upwards and then toward the back of her head. For centuries, this was considered to be a women’s hairstyle until Elvis Presley capitalized on the look during his King of Rock n’ Roll days in the 1950s through 1970s. Ever since then, it has become a men’s hairstyle.

There are variations of the pompadour, but the basic style involves keeping your hair short on the sides while swooping your other hair up and to the back. You don’t necessarily have to buzz cut the hair too short on your sides like with an undercut hairstyle. A lot of men just like to have their side hair trimmed with scissors or possibly faded a bit. You can choose any length that you want for this.

A lot of men have their own special reasons for wanting a pompadour. Aside from the fact that a lot of male celebrities like Brad Pitt, James Franco, and Bruno Mars are getting pompadours now, the average man might also want to get this hairstyle just to cover up some baldness on their scalp, so they can feel and look younger.
Discover the best Pompadour Hairstyles for men 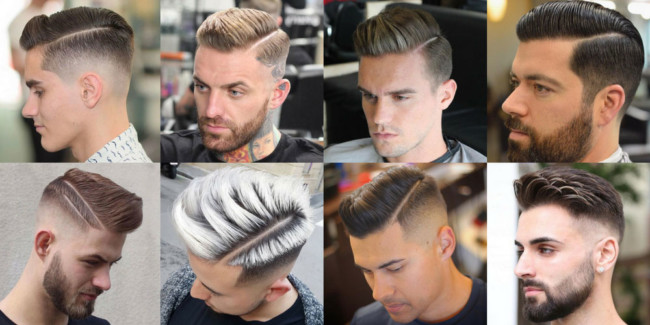 The Comb Over is a hairstyle specifically designed for balding men. This goes a step further than a pompadour because a comb-over involves growing your existing hair long for the purpose of combing it over the baldness on the top of your head. There is nothing exactly stylish about a comb-over other than the fact that it naturally hides baldness.

A lot of men will part their hair with the comb-over just to give the illusion that it is a parted hairstyle. If the baldness is too wide on the top of the head, the part in the hair will fall much farther down on their head than seen in a traditional parted style. However, it still makes men feel more confident and better about themselves.

The comb-over is one of the oldest hairstyles in the world. It goes back to the days of Ancient Roman when Constantine the Great and later Julius Caesar had comb-overs on their head. In modern times, Prince Charles of Wales and U.S. Senator John McCain are some recent examples of famous men with comb-overs.

If you want an extreme example of a comb-over then you can look at Donald Trump’s hairstyle, but you don’t have to go that crazy. Most comb-overs are styled much better than that one.

Discover our articles about the Comb Over Haircut

ABOUT US
Men’s Haircut is a participant in the Amazon Services LLC Associates Program, an affiliate advertising program designed to provide a means for sites to earn advertising fees by advertising and linking to amazon.com
FOLLOW US
© Men's Haircuts